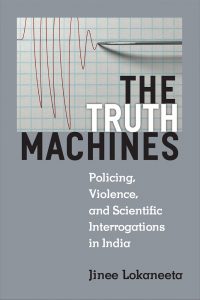 Using case studies and the results of extensive fieldwork, this book considers the nature of state power and legal violence in liberal democracies by focusing on the interaction between law, science, and policing in India. The postcolonial Indian police have often been accused of using torture in both routine and exceptional criminal cases, but they, and forensic psychologists, have claimed that lie detectors, brain scans, and narcoanalysis (the use of “truth serum,” Sodium Pentothal) represent a paradigm shift away from physical torture; most state high courts in India have upheld this rationale.

The Truth Machines: Policing, Violence, and Scientific Interrogations in India
examines the emergence and use of these three scientific techniques to analyze two primary themes. First, the book questions whether existing theoretical frameworks for understanding state power and legal violence are adequate to explain constant innovations of the state. Second, it explores the workings of law, science, and policing in the everyday context to generate a theory of state power and legal violence, challenging the monolithic frameworks about this relationship, based on a study of both state and non-state actors.

Jinee Lokaneeta argues that the attempt to replace physical torture with truth machines in India fails because it relies on a confessional paradigm that is contiguous with torture. Her work also provides insights into a police institution that is founded and refounded in its everyday interactions between state and non-state actors. Theorizing a concept of Contingent State, this book demonstrates the disaggregated, and decentered nature of state power and legal violence, creating possible sites of critique and intervention.

Interview on the Book:

“What does the turn to using ‘truth serums’ (narcoanalysis) mean for India’s police?” |  The Big Q