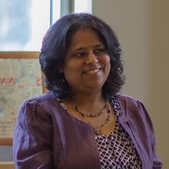 Jinee Lokaneeta is Professor in Political Science and International Relations at Drew University.

Jinee received her PhD from the University of Southern California (USC). Prior to USC, she taught Political Science at Kirori Mal College, Delhi University, India. Jinee completed her Bachelors, Masters and Mphil in Political Science at Delhi University. Her areas of interest include Law and Violence, Critical Political and Legal Theory, Human Rights & Interdisciplinary Legal Studies. She joined Drew University in 2006. She is also affiliated with the Womens and Gender Studies Program at Drew. She is the former President of the Consortium of Undergraduate Law and Justice Programs. She is on the Editorial Board of American Political Science Review and Politics and Gender.

Her most recent book The Truth Machines: Policing, Violence, and Scientific Interrogations in India (University of Michigan Press, March 2020, Orient Blackswan- South Asia edition, 2020) theorizes the relationship between state power and legal violence by focusing on the intersection of law, science and policing though a study of forensic techniques-narco analysis, brainscans and lie detectors. The Truth Machines was the co-winner of the C. Herman Pritchett Award from the Law and Courts Section of the American Political Science Association. She is the author of Transnational Torture: Law, Violence, and State Power in the United States and India (New York University Press, 2011, Orient Blackswan 2012) and the co-editor with Nivedita Menon and Sadhna Arya of Feminist Politics: Struggles and Issues (in Hindi). Delhi: Hindi Medium Directorate, 2001. At Drew, she teaches courses titled Law, Justice and Society; Torture: Pain, Body and Truth; Policing and the Rule of Law; and Global Discourses on Human Rights.